A decadent and luxurious evening at the Baccarat Hotel New York for their The Art of Pairing Series dinner with Rare Champagne and In Pursuit of Tea. 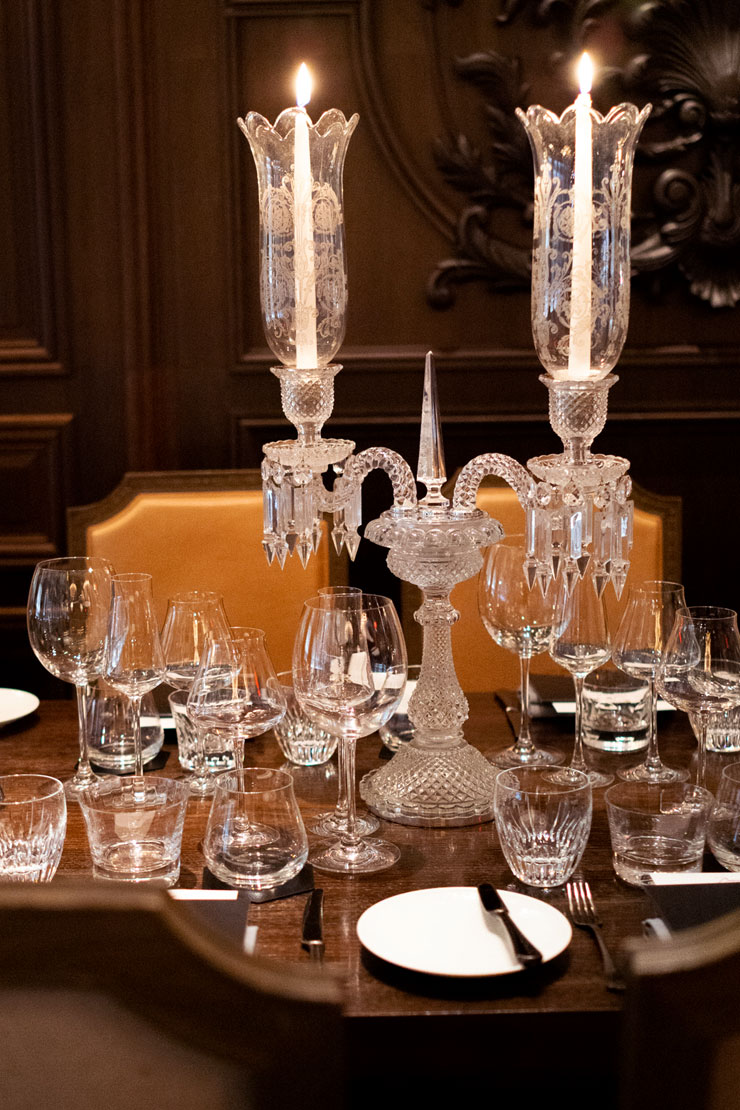 The Art of Pairing Series at the Baccarat Hotel

Did you know the Baccarat Hotel New York does special events with tea and food pairings? I didn’t until I was lucky enough to attend one thanks to an invite from Gabrielle, the Baccarat’s tea sommelier.

About once a month, in the Petite Salon on the second floor of the hotel, the Baccarat holds an intimate dinner pairing tea and food. This time, they added champagne to the mix and next week, it’ll be with scotch.

As you can image, it was a completely wonderful experience. I loved it.

Let me show you how the evening unfolded.

I took the elevator to the second floor where I was greeted by the hostess who led me to the Petite Salon. (It’s a room right next to where afternoon tea is served.)

Inside was a table decked out in Baccarat crystals. The stemmed glasses, the cups, the candle holders were all Baccarat.

Was I scared I would knock something over and break it? Gulp, YES.

There were nine dinner guests, including Sara and me. 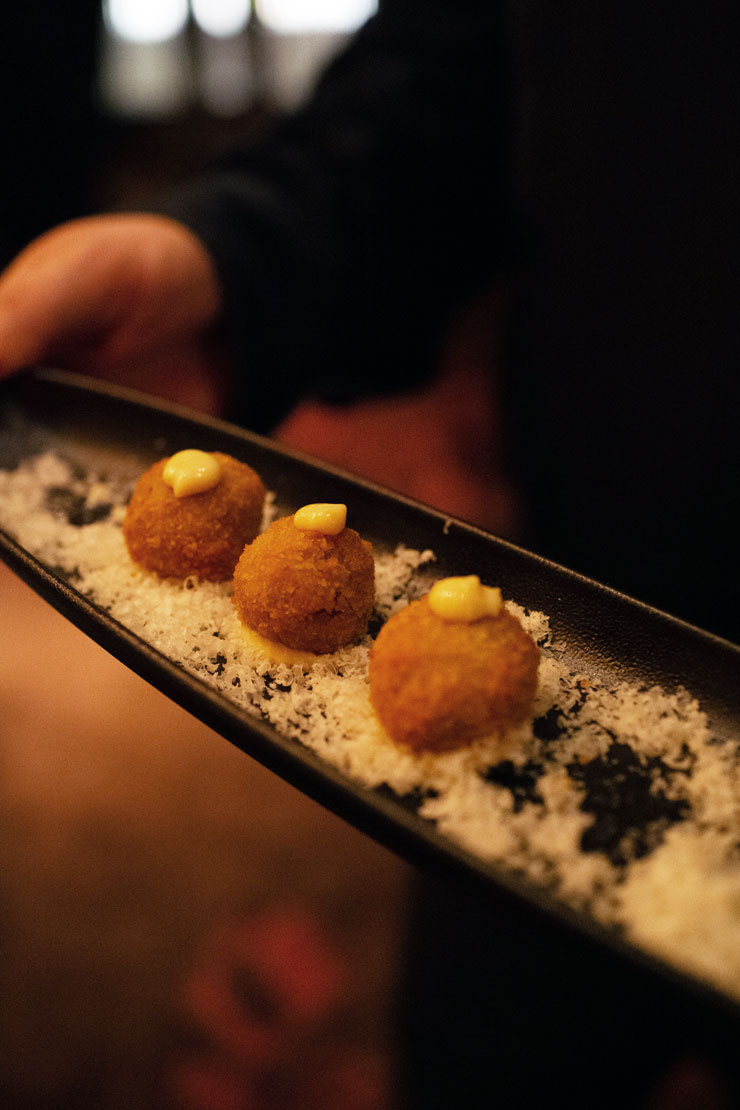 Before we sat down at the table, servers were walking around with small bites and I was given a cold brewed green tea.

I spotted Gabrielle, who is the mastermind behind the Baccarat afternoon teas and the dinner pairing series, and chatted with her for a bit. 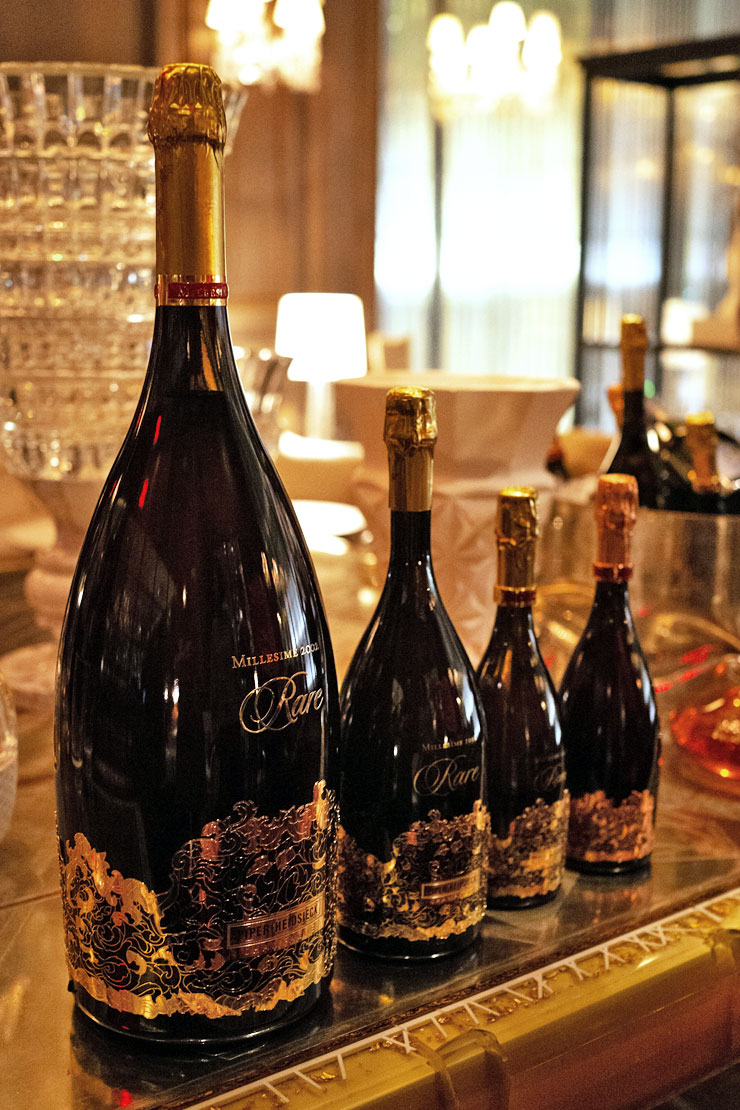 In the middle of the room were the Rare Champagne bottles that were to be served for dinner.

The bottles were gorgeous.

By the way, I don’t drink so I missed out on pairing champagne with the food but I did drink a ton of tea to make up for it.

Once we were seated, the menu showed five courses including dessert.

The hosts of the evening were Sebastian Beckwith and Ana Dane from In Pursuit of Tea and Jonathan Boulangeat from Rare Champagne. At the start of each course, they gave us a little info on the pairing and how and why they chose the tea or the champagne.

This was a full on dinner pairing the food with the champagne and tea. I left very very full.

First course was a caviar with a quail egg buttermilk mousseline (fancy hollandaise sauce) which was served with a refreshing sencha green tea served in a crystal cup and a Brut Reserve Magnum in a wine glass.

I ate up the caviar like someone was chasing me.

I barely took a sip of the sencha while eating the caviar so I can’t even speak to the pairing. (Nor took the time to take a photo.)

This was served with Cuvee Rare 2002 and Temi Estate 1st flush which tasted a lot like Darjeeling. 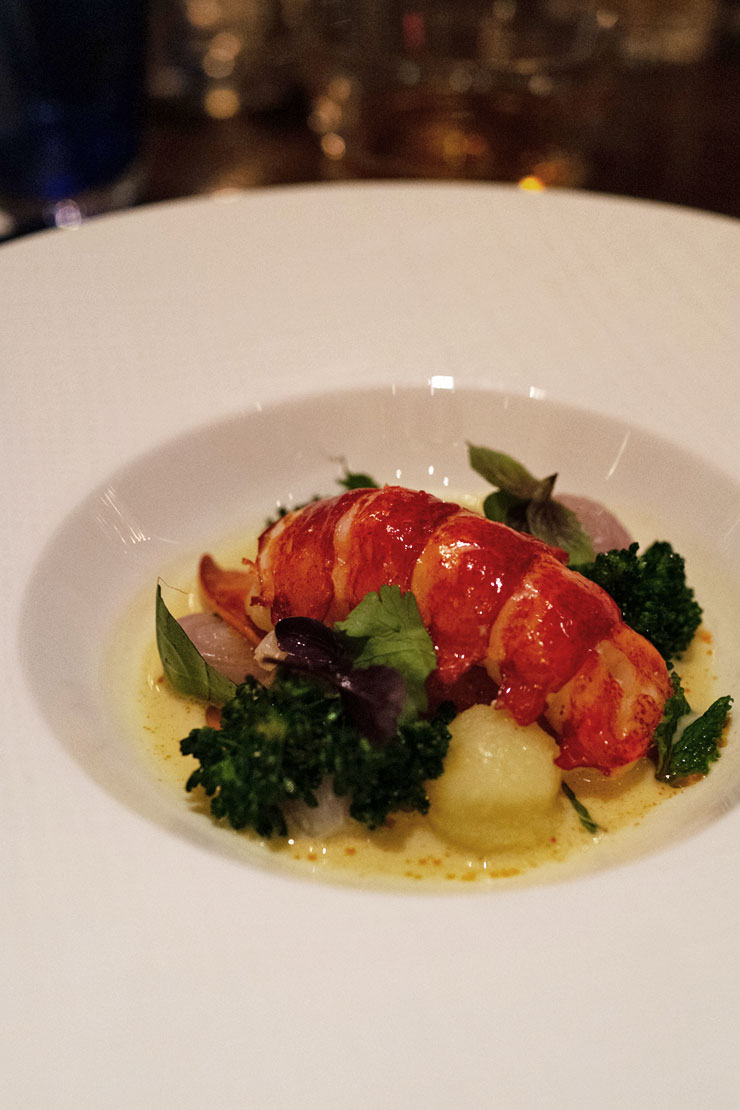 Third course was a curry-poached Maine lobster. The curry sauce was especially delicious and went well with the sheng puerh it was paired with. 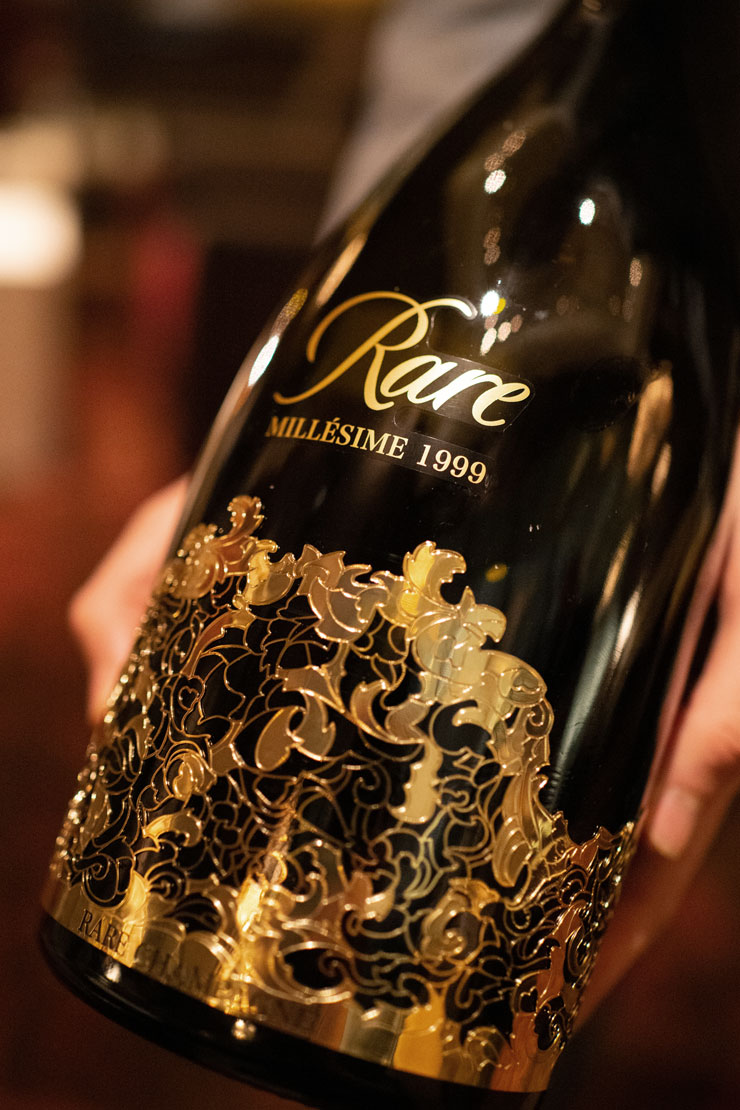 A Cuvee Rare from 1999 was the champagne pairing.

Interestingly, the decorative gold label at the bottom can be taken off and it’s in the shape of a crown. 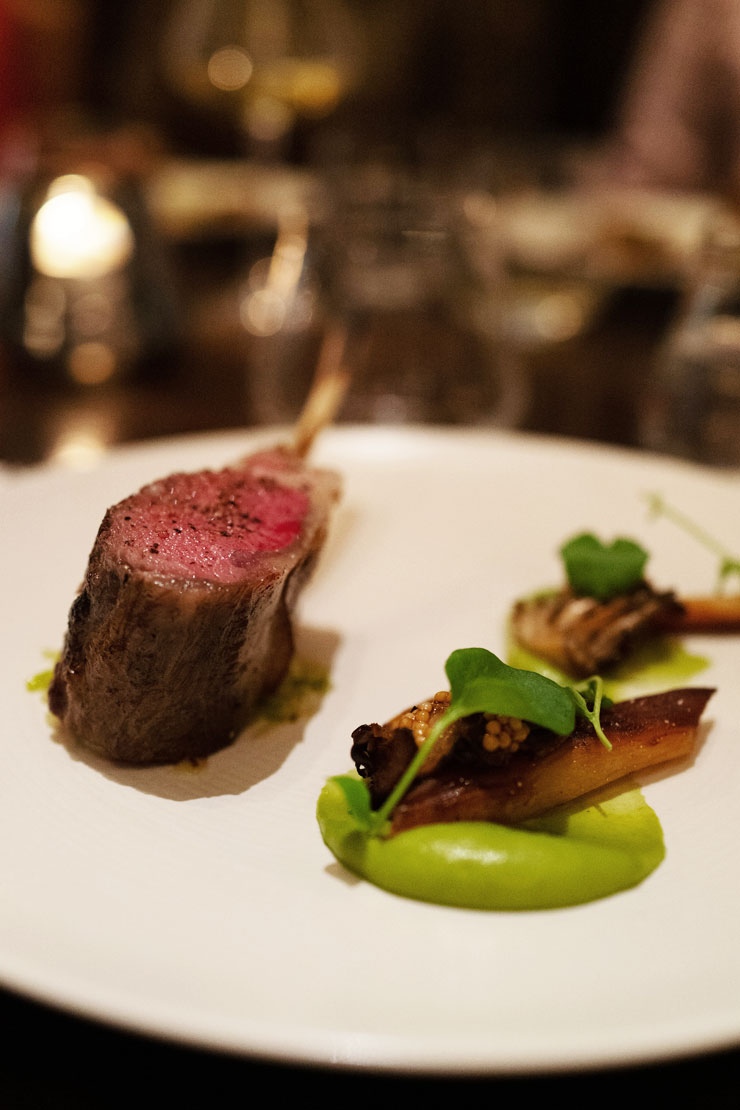 The fourth course was lamb — this was my favorite of the night. It was SO GOOD.

This course was the final pairing of the night. It was served with a Taiwanese oolong and a gorgeous pink (Cuvée Rare Rosé 2007) champagne that gave off notes of cotton candy and strawberries.

The dinner ended with a fifth and final course of dessert. It was ice cream, sorbet, and deliciously airy meringue all in a Baccarat crystal goblet. I’m still dreaming about the meringue.

(See Sara’s post to see the dessert. My camera refused to focus and I couldn’t get a decent photo.)

The evening started at 6PM and by the time it was all over, it was almost 10PM!

If you’re interested in attending their The Art of Pairing Series, you can find the latest on the Baccarat site or announced on their Instagram account @baccarathotels.

The next one is a dinner with scotch and tea which should be just as over the top.

// The Art of Pairing Series – Rare Champagne and Tea courtesy of Gabrielle at the Baccarat Hotel New York. // 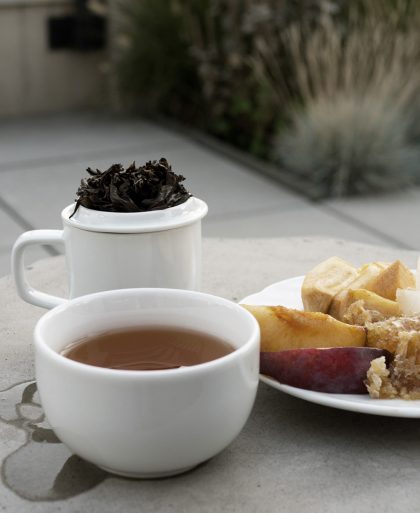 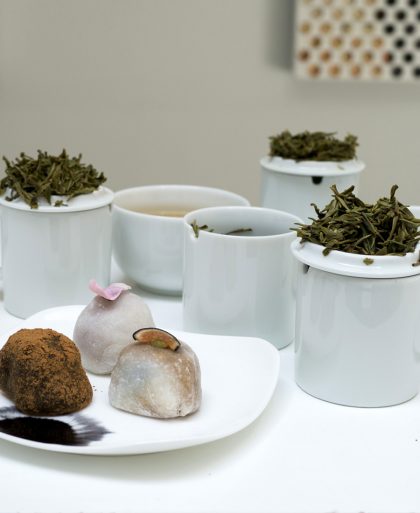 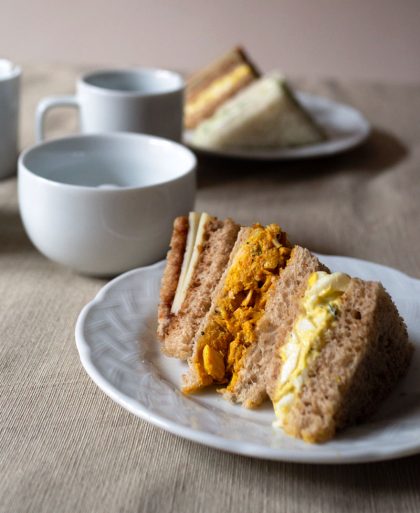 Tea for One Sets