With an Earl Grey tea base, London Fog is a tea latte with warm milk, vanilla extract, and sweetened with sugar. Make London Fog at home with this simple yet tasty recipe.

A London Fog drink is an Earl Grey tea latte. It’s a delicious pick-me-up on a dreary day.

What’s in this London Fog?
Earl Grey, brown sugar, vanilla extract, and dried lavender buds. What makes my London Fog so great is the perfect froth I create using a French press.

Join my email list to get these tea brewing cheat sheets!

How to Make it

There are two parts to this drink:

Boil water on the stovetop or use an electric kettle with a temperature setting (water set to 208°F).

I always recommend filtered water when making tea. The better the water tastes, the better the tea will taste.

For each cup of London Fog, use 1.5 teaspoons of Earl Grey.

While tea is steeping, make the frothed milk.

Heat milk on the stovetop by simmering on low until it gets hot. Keep careful watch to make sure the milk doesn’t come to a boil. Stir occasionally.

Time to assemble the drink!

STEP 7: Strain tea leaves and pour tea into a cup.

STEP 9: Pour frothed milk from the French press into cup with tea. 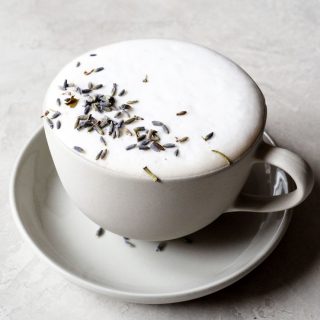