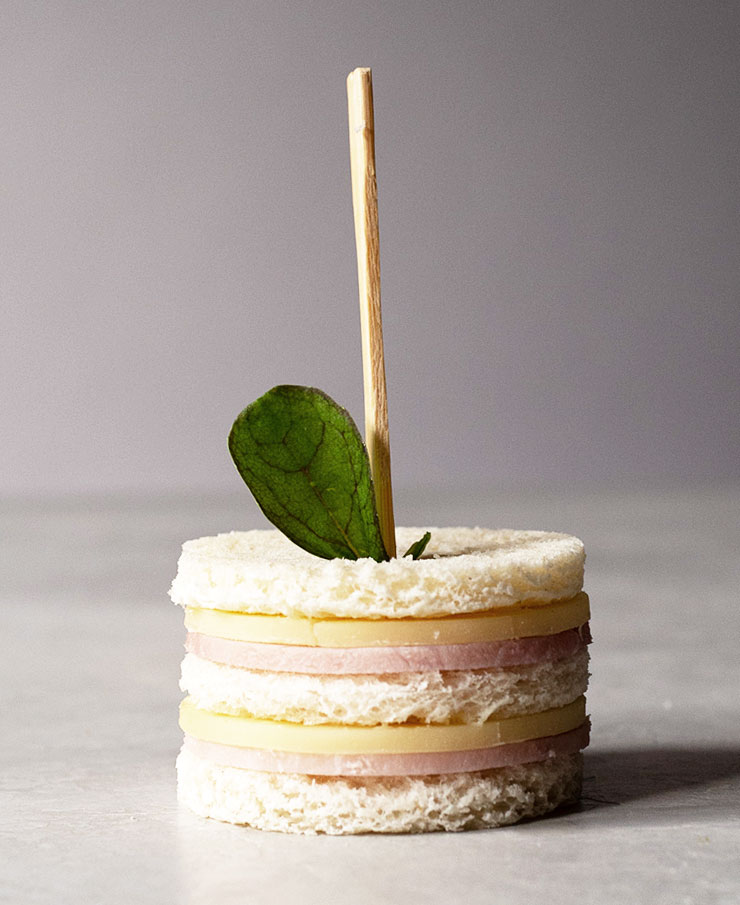 Double stacked and gone in 2-3 bites, these ham and cheese finger sandwiches are an adorable miniature version of a regular, full-sized sandwich.

Tea sandwiches are small, neat, and compact as they’re meant to be dainty. And these certainly check all the boxes.

With alternating layers of bread, ham, and cheese, the sandwiches are topped with a microgreen leaf and skewed with a cocktail fork. 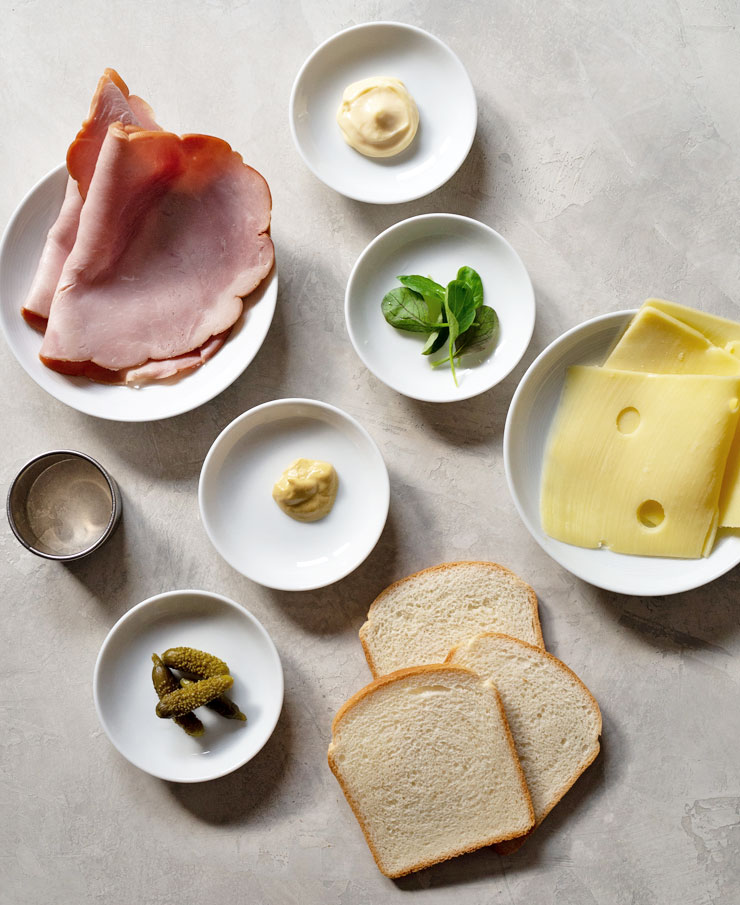 What I Used to Make Ham & Cheese Mini Sandwiches 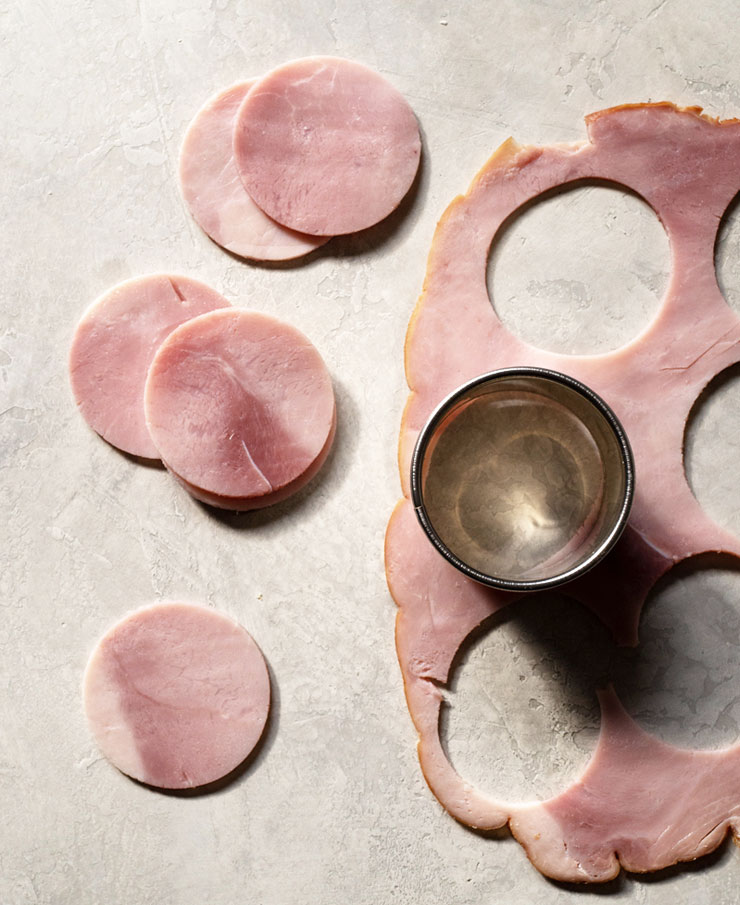 How to Make Ham and Cheese Finger Sandwiches

This recipe is all about cutting out circles using a cookie cutter and stacking them. Easy peasy.

With a round cookie cutter, start cutting perfect circles out of the ham and cheese. Use the same cookie cutter size so that all circles are the exact same size.

At the deli, I ask them to cut the ham and cheese into the same thickness so that they look prettier when stacked on top of each other.

You can go with any ham you like. For this, I went with Black Forest ham.

Did you know it’s called Black Forest ham since the ham is produced in the Black Forest region of Germany? Thanks, Wikipedia! 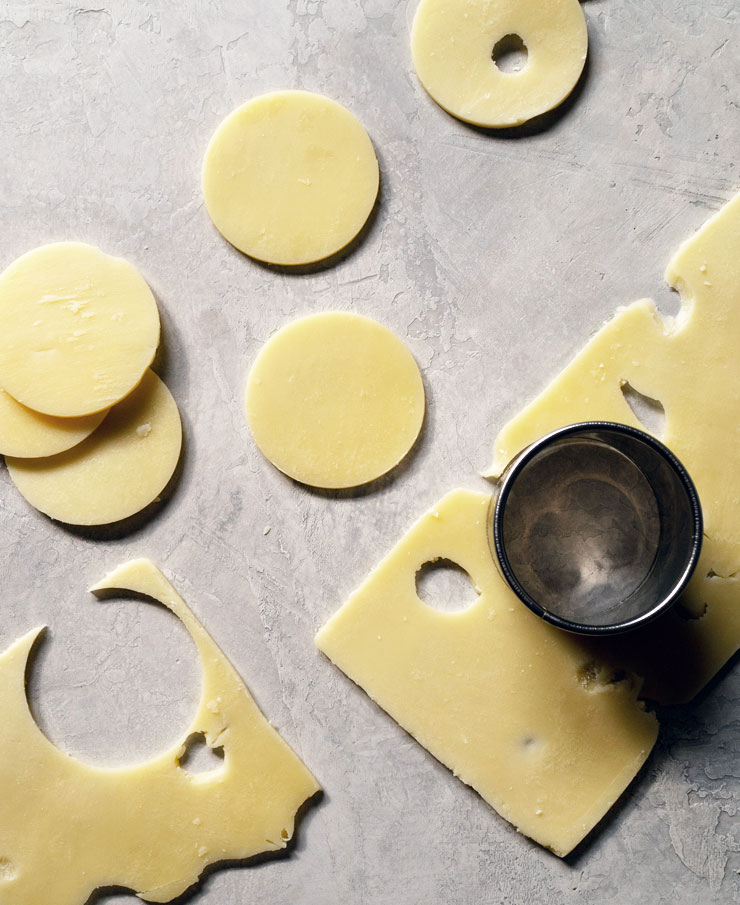 Cut even bigger circles out of the Swiss cheese.

Hmm, does this mean Swiss cheese is also named because it has to be produced from Switzerland? NOPE.

Apparently Swiss is not so fancy as the Black Forest ham. Sorry, Swiss cheese, but you’re just a generic name for cheese that’s made in the US that resembles cheese that once came out of Switzerland, the Emmental. 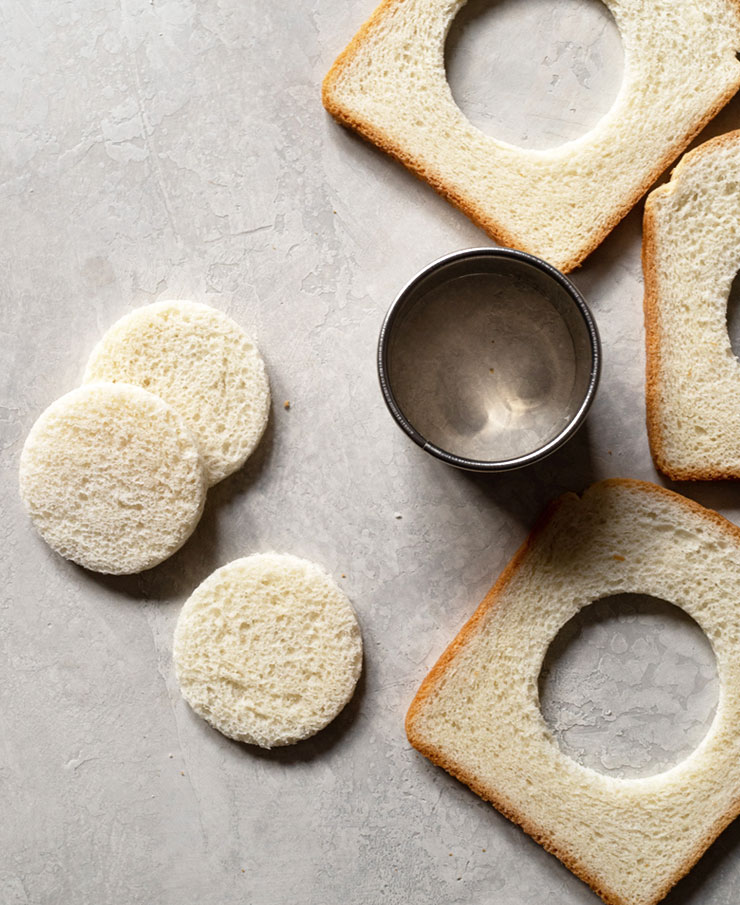 Use the same cookie cutter to cut holes out of the bread.

Get ready for a pro tip! Freeze the bread and then cut out circles one slice at a time. You’ll get nicer sides that don’t look as pinched as you would with room temperature bread.

Let’s stack them up!

In between each layer, I slather on some mayo (the Japanese mayo is my ultimate favorite) and Dijon mustard (and also this mustard is my holy grail mustard and the only one I use), alternating layers.

The mayo and mustard do two things: they bind the layers together so it’s much neater to pick up and eat AND it keeps the sandwich from being too dry. 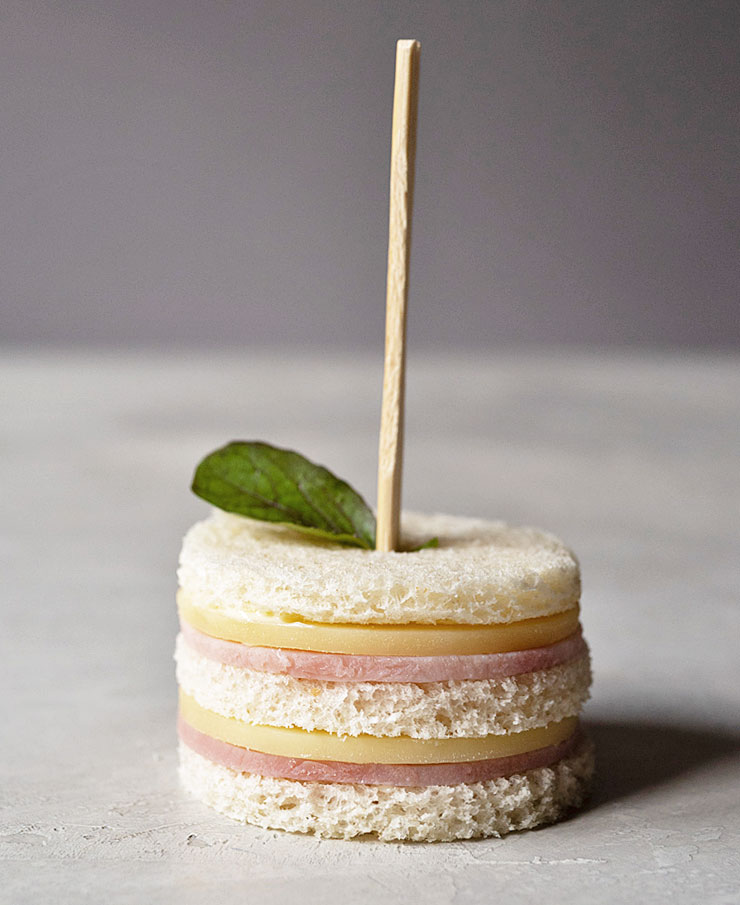 I top the whole thing with a tiny green edible leaf and skewer it all together with the cocktail forks. CUTE! 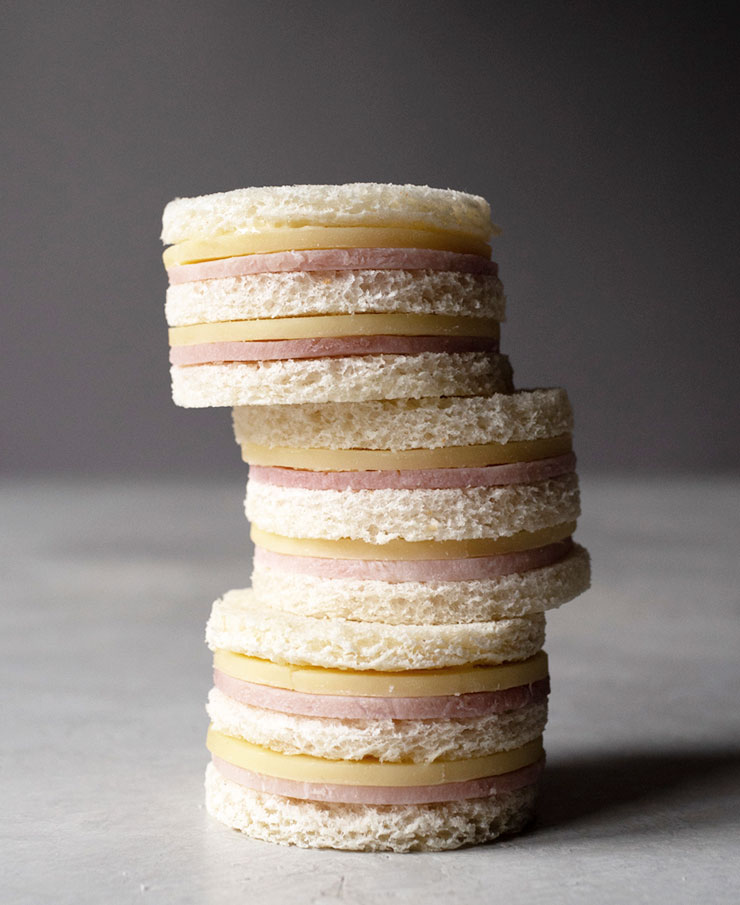 These are fun kid-friendly snacks for kids that you can make with them. I would take the cocktail forks out though since that’s a little too fussy for a snack. Oh, and there’s that whole pesky pointy things and eyes when it comes to kids. 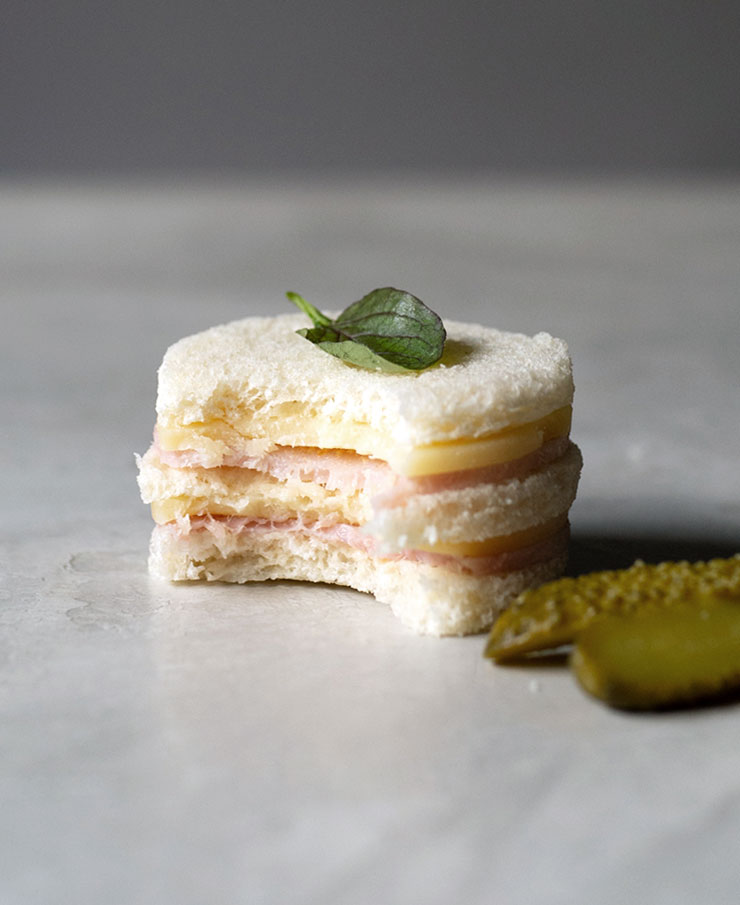 Serve with a Side of Cornichons

I like to serve these mini bites with cornichons which are basically tiny pickles. They’re such a great burst of flavor that cuts through the richness of the sandwich.

I first tried making the sandwiches with the cornichon all cut up and mixed with the mayo but that really didn’t work. By cutting it up into small pieces, it made the sandwich lumpy (gasp! no!) and I missed the satisfying crunch. 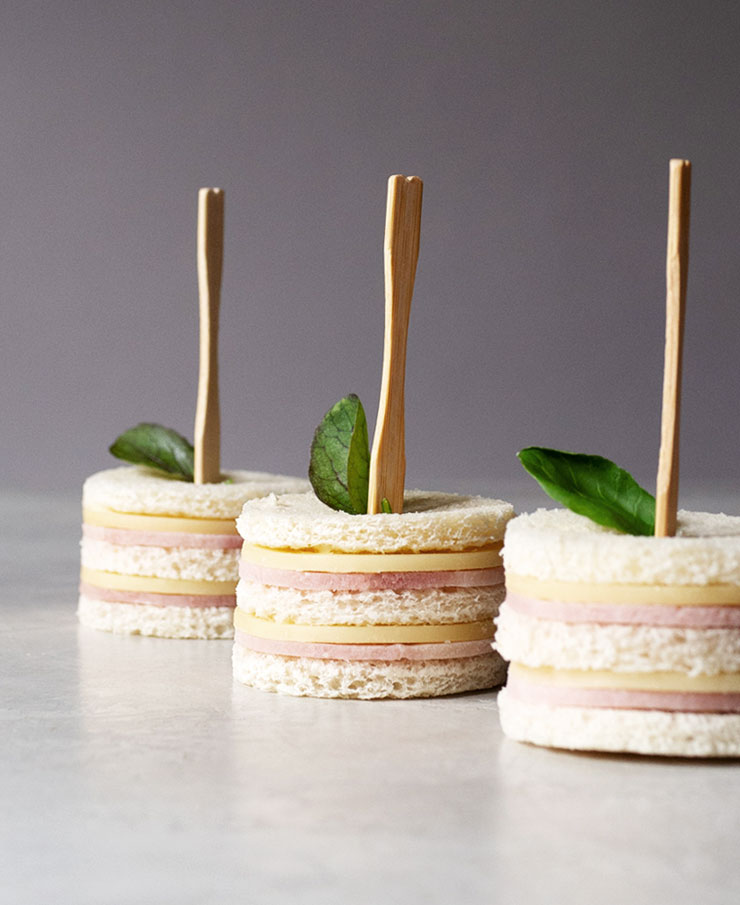 Best Tea to Pair with Ham and Cheese Sandwiches

A black tea would go perfectly with the hearty flavors of this sandwich. It’ll hold up well through the richness from the ham and the Swiss cheese.

I would recommend Earl Grey, English Breakfast, or Darjeeling. 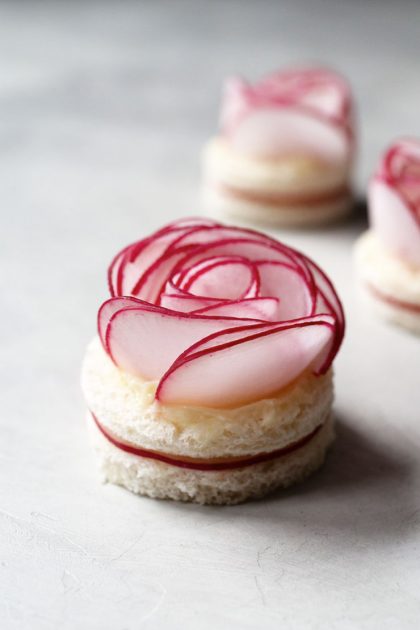 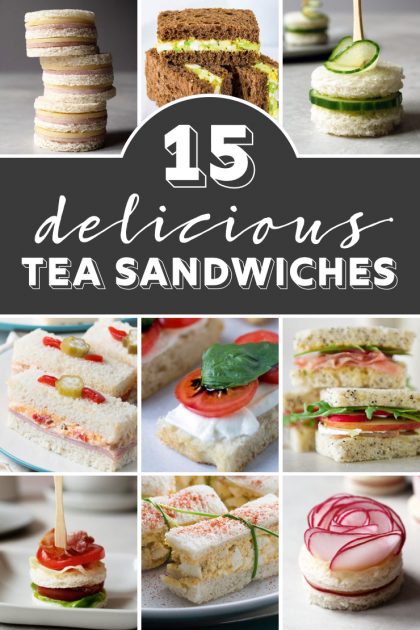 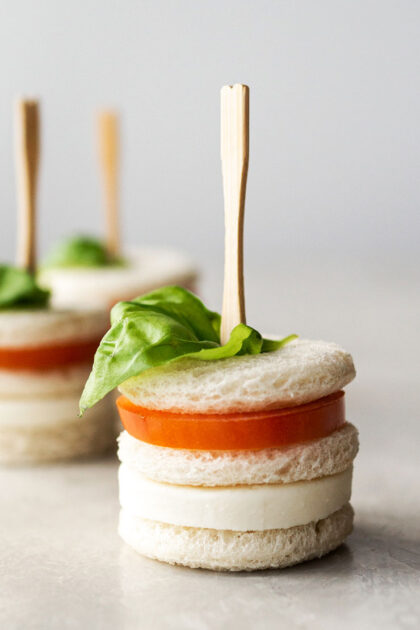 How to Make Tea Lattes